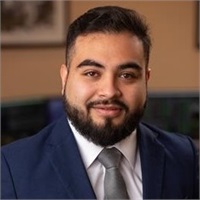 Pablo’s interests in the financial industry began in his home town of Bogota, Colombia, where he watched his father have a successful career in the financial industry. His father's business prowess inspired him to want to pursue a career in investing. Pablo moved to Melbourne, Florida in 2012 to pursue his degree in finance from Florida Institute of Technology, which he achieved in 2016. He then went on to achieve his Masters in Finance Degree in 2020.

Pablo has been a part of the Connors Wealth team since 2016, moving from his role as an investment research intern to his current position as a Senior Investment Associate. He enjoys helping the people around him to better understand the market.

Getting to Know Pablo:

Favorite Quote: “Believe in Change, But Make it Happen."

Favorite Holiday: Fourth of July (which also happens to be his birthday!)

If Pablo could meet anyone past or present, it would be: Winston Churchill, because he was one of the greatest strategist in history

Pablo would like to visit: Dubai, because it is evidence that with the necessary financial resources and adequate planning, it is possible to turn a desert into paradise.